“Groovalicious!” sounds like just the sort of thing Austin Powers might say if he heard the deliciously funky, ultra-hip and vibey, retro-jazz-soul flavors on Chris Standring’s long awaited follow-up to Hip Sway, his hit 2000 recording which defined the urban-minded contemporary jazz experience as we crossed millenniums. 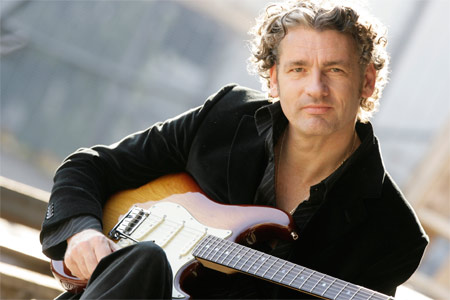 After years of immersing himself in London’s studio scene, he moved back to L.A. and started an edgy local band with a fusion leaning. Hooking up with Rodney Lee when both played with singer Lauren Christy (now part of the powerhouse production team The Matrix) introduced Standring to the funkier side of jazz. The two clicked immediately, releasing the well-received acid jazz project SolarSystem on Sonic Images in 1996. Standring also plugged heavily into the smooth jazz scene and started gigging with genre stars Rick Braun and Marc Antoine. He joined those two on the annual Guitars & Saxes tour in 1998 just as Velvet was hitting the charts. It hit #9 on the Gavin and R&R radio charts and was a Top Ten pick from Jazziz Magazine.

Since Hip Sway cemented his status as one of smooth jazz’s top stars in 2000, Standring has appeared regularly at top festivals (including the Catalina Island Jazz Trax Festival) and was a regular performer at The Wave’s Smooth Jazz Nights at the Garden of Eden in Hollywood. He’s also traveled back to London each winter to perform shows at the popular Pizza Express jazz club. The guitarist has also appeared on numerous jazz and R&B recordings, including dates by Braun, Bryan Savage, Jody Watley and Bebe and Cece Winans.

That fresh, hipswaying coolness and heavy pocket grooving seduces us into the Groovalicious experience as well, but with a mini time-traveling twist—its retro tastes move up a decade from Hip Sway, firmly into the deeper funk elements of the 70’s. With the exception of “Say What!”, a locomotive blues-oriented track reminiscent of Lee Morgan’s classic “Sidewinder” that recaptures that 60’s train of thought, the tracks on Groovalicious take the hottest retro sounds of the Me decade and fuse them with a very contemporary drum and bass foundation. Add to those some of Standring’s best compositions ever and the cool yet edgy string style he and his trademark Robert Benedetto arch top jazz guitar have become famous for, and it’s clearly time for some finger snapping, fast and slow dancing, and…whatever comes next with your dance partner.

“Replete with the intoxicating west coast vibe that Standring effortlessly incorporates into much of his work…certain to get in your head and not go away…Standring’s soulful guitar shimmers throughout…the stuff of which musical dreams are made…delivers another absolute stunner…a joy from beginning to end…all set to be one of the sensations of the year.”

by Chris Standring
Available now on: