River of the Soul (CD/DVD) is a musical and cinematic journey through the remote regions of Indonesia, Burma, Thailand, Nepal and Hawaii. The awe-inspiring visuals are set to the music of Danny Paradise who is accompanied by Sting, Paul Simon, Edie Brickell and Chris Botti along with amazing world musicians. River of the Soul reveals the beauty of the local people, their mystical ceremonies and precious natural environments, while demonstrating the profound movements of Hatha yoga. The accompanying audio CD soundtrack offers the listener a harmonious blend of Eastern and Western sounds that invoke 1960’s folk music, the exotica of world music and the spirituality of a 21st century yogi. 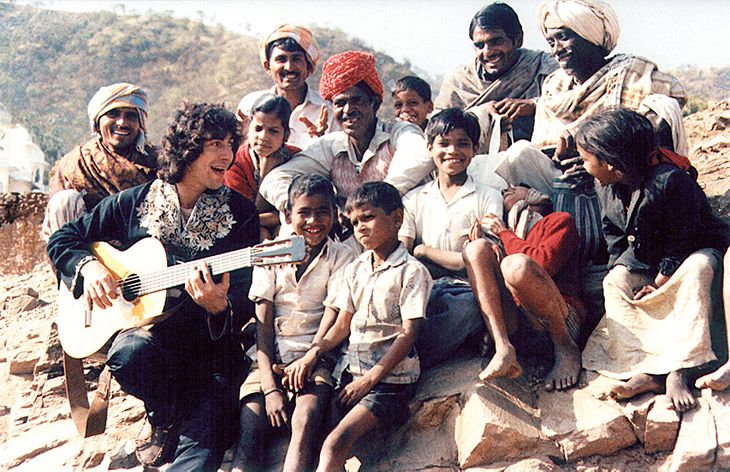 Danny Paradise, yogi and musician, is a friend to the world. River Of The Soul, his long overdue debut recording, reflects a lifetime of experiences roaming the world, and in its whole becomes the snapshot of a wandering 21st century yogi and troubadour. As he sings on the album’s title track: “We’ve got to roll with the sun, there’s a direction we can run, some inner river of the soul.” The Album draws from many of the principles Danny has built his life around, including those within his yoga teachings. Lyrically, River Of The Soul embraces feelings of spirituality, love of nature, the religions and philosophies of North and South American Native Indian traditions,as well as eastern religion and philosophies.

Originally from Toronto, Paradise has spent the last twenty years traveling “a luminous path” around the globe. A world renowned and esteemed teacher of Ashtanga Yoga, Danny has built an international following of students that includes Sting, Madonna, Paul Simon, Eddie Vedder, Mickey Hart and Bob Weir. While not eschewing the virtues of yoga, Danny is picking melodies out of the atmosphere on his nylon string guitar. Paradise has been a professional musician since the early 1970s, having performed through- out North America, Europe, Brazil, India, Nepal, Israel, Egypt, Taiwan, Indonesia and Thailand.

Growing up, Danny was a devoted listener to a variety of acoustic folk and blues singers, including Woody Guthrie, Taj Mahal, Cat Stevens and James Taylor, as well as the lush pop arrangements and exotic instrumentation of classic records by The Beatles. Although River Of The Soul reflects melodies inspired by his travels through Nepal, Indonesia, Burma and Thailand, Danny incorporates a myriad of these Western pop cornerstones within his songwriting. His guitar playing, additionally, has its roots in the rhythmic music of Brazil, such as that on “Ye Rising Stars,” adding yet another striking element to his sound.

While teaching yoga in Nepal, Danny was introduced to members of the musical groups Karma and Prastar, with whom he eventually recorded six of the album’s songs. “They are the best players in Nepal. They’ve all been playing together since they were kids,” Paradise explains. “They had only played with one other western musician before, the mandolin player Peter Rowan (author of “Panama Red” and lead singer of Old and In the Way and Seatrain), who had traveled through Nepal the previous year.” Danny’s Nepalese band blends exotic strains of flowing flute and violin lines with pulsing tablas and shimmering sitar. The music has an organic, rambling style that provides the perfect backdrop for Danny’s narrative prayer-like poems and lyrics. “They’re used to playing Eastern scales – ragas but they picked up my songs so fast,” Paradise continues. An example of this unique chemistry is captured on “At The Conference Of The Birds.”

Ultimately Danny and the musicians of Karma and Prastar recorded his songs “live” in the studio, giving the album a fresh spontaneous feel while capturing the spirit of the moment. “We only had a few mikes and there were power failures all the time,” Paradise recalled with a laugh. “By the second or third take they had it. I just let them do their thing. They were improvising most of the time. We were very tuned into each other.” This collective approach to the music on River of the Soul at times recalls Van Morrison’s classic album Astral Weeks.

Two other songs on the disc, “Bedouin Dream” and “Freedom Fighters” were recorded in Cairo with multi-instrumentalist Dominic Miller, who has worked with Sting for the past eleven years. Danny met Dominick while performing at a club in London. These songs feature the oud (an Arabic lute), which adds the mystical realm of North Africa into the musical palate of River of the Soul.

Danny additionally sites the great 13th century mystical Sufi poet Rumi as a major influence on his lyrics. On two occasions, “In Search of the Dream People” and “Ye Rising Stars,” he adapted the timeless verses of “the Shakespeare of the Mid-East” to his nylon string guitar. Although Danny’s verses have a particularly spiritual flavor, he shows a sharp tongue-in-cheek wit on “Now that the Shamans Have Planes,” which is sung with Paul Simon on background harmony and features additional harmonies by Edie Brickell.

While “world beat” has become a popular trend in recent years, Danny Paradise actually lives the source of his inspiration. Rather than create a pastiche in some digital studio in New York or LA, he records with third world musicians in studios in Nepal and Egypt. “I went around the world when I was a kid and ever since I’ve been going back. I’ve been exploring Asia for over twenty-five years. I was shocked by the difference in the east and the west. I love the atmosphere in Indonesia and Bali. I’m from the west but I enjoy other cultures more. It’s more interesting to me. Everything is very alive and happening on the streets in Asia. In teaching Ashtanga Yoga I’ve been able to work wherever I go. I’ve hung out in the Amazon and taught yoga in remote regions of Brazil. I like to become part of the community and meet people rather than travel as a tourist,” Paradise concludes.

Danny’s concern for the human condition, often encountered in third world countries, is reflected by donating a portion of the album’s sales to Witness, an organization that provides video cameras to document human rights abuses around the world. “I want to give something back to the wonderful people of these remote lands who are often not granted the same rights as people in more developed countries. Witness is playing an important role in furthering human rights. I’m glad I can contribute in some way.”

The message of River of the Soul comes across soft but clear – like a haiku telegram from the Himalayas. Wherever we go on this earth, Danny Paradise reminds us to stay “Flexible” –

“Stay flexible with room to spare
Stretch from here to anywhere
Change direction like nobody knows
Follow that wind wherever she blows.”

by Danny Paradise
Available now on:

Danny’s “Caravan of Souls” has 16 tracks. Click any of the store links for a complete listing. Below is the first single release “Love Will Rescue You” from Caravan of Souls.

River Of The Soul

by Danny Paradise
Available now on:

“…a rare journey of diverse beauty and inspiration. Learn and enjoy!”

“Danny Paradise reflects his life through his music. An avid traveler, ashtanga yogi and teacher, his music tells the tales of mystical sunrises and houses made of bamboo. River of the Soul is organic, folky and interesting, with well-crafted circular melodies. Danny met his band while teaching Yoga in Nepal. Members from Nepal’s Karma and Prastar record six of the album’s tracks, accompanying Danny’s nylon string guitar with flute, violin, sitar and tablas. Other songs were recorded in Cairo with Dominic Miller, a multi-instrumentalist who works with Sting.

Speaking of Sting, Danny Paradise’s yoga students include Sting, Madonna, Eddie Vedder, Paul Simon and Mickey Hart! Paul Simon, Edie Brickell and Sting add a little bit of their magic to several tracks. The lyrical content is poetic, spiritual, even trippy! Portions of the CD’s proceeds go to Witness, a human rights organization that provides video cameras to document human rights abuses around the planet. Danny Paradise is a luminous citizen of the world, a traveler fully connected to the Source.”