“I dedicate this record to the people of Nigeria for their determination, good humor, indomitable spirit and their unfailing faith in working towards a better future. We have labored these many years since independence to re-establish democracy, human rights, a free and fair society, and a better world for all of our children.” — King Sunny Ade 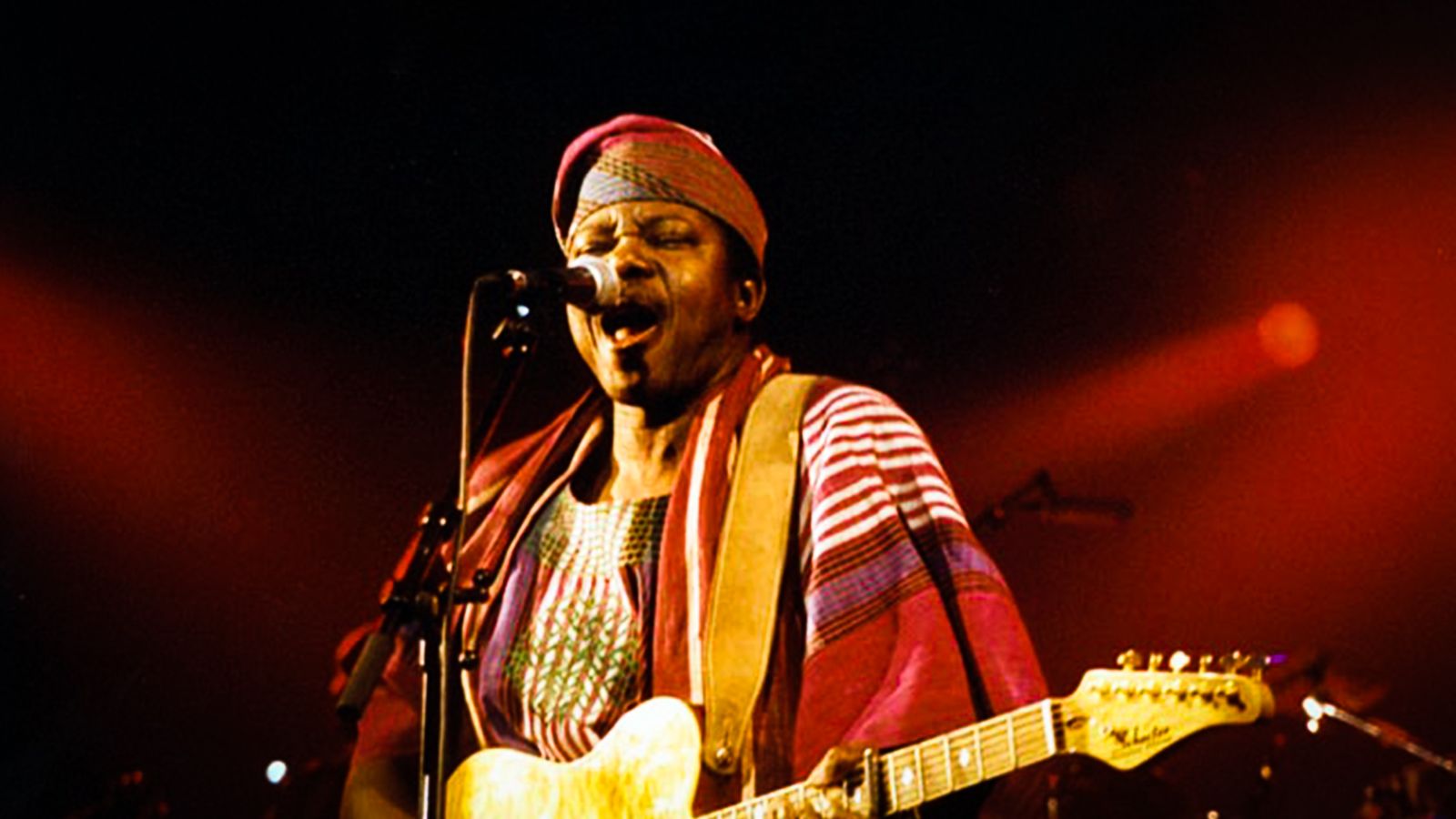 King Sunny’s new release “Seven Degrees North” is a spiritually uplifting soundtrack to the democracy movement of Sub-Saharan Africa’s largest city, Lagos, Nigeria. The music takes on many issues: from those that express in simple praise, the Lord’s good works, to those that delve deep into the Yoruba world of proverbs and metaphor to deliver a deeper message about freedom and hope.

Juju is a thrilling hybrid of Western pop and traditional African music that incorporates electric guitars and synthesizers with such indigenous instruments as talking drums. Lyrically, juju is rooted in the Yoruba tradition of conveying broad social and cultural messages through archetypal proverbs and parables. A remarkably convivial music, juju has at its heart a dynamic and interactive nature that incorporates a plenitude of grooves, call-and-response choruses and polyrhythmic breaks. Multiple lead guitars, harmonic counter-melodies, and shimmering waves of multi-layered percussion blend with sonic surprises – such as reggae and dub sound system effects or the lilting pedal steel guitars of American country & western – that traverse the boundaries of culture and genre.

King Sunny began his extensive career as a member of Moses Olaiya’s Federal Rhythm Dandies then later became the bandleader with the Green Spots. Though he has released more than 100 records in Nigeria, King Sunny first became known in the U.S. after a critically acclaimed three-record run on Island Records in the 1980s. Since then, he and his African Beats have become a leading light in bringing African pop to the West. Recognized as the ambassador of juju, King Sunny has been called “the titan who dominates juju music” by the Village Voice. His last release “Odu” was nominated for a Grammy Award for 1998’s “Best World Music Album”. In 1995, KSA signed up with Mesa/Atlantic and released the acclaimed “E DIDE/GET UP,” the King’s first American studio album in over a decade.

A great many musicians talk about giving back to the community, but few have contributed as generously as King Sunny. He is known to many at home as ‘the Chairman,’ an appellation he earned due to his top role in numerous and diverse businesses. A sort of capitalist-cum-philanthropist, King Sunny has channeled the monies earned as a music superstar into holdings in a multitude of companies, including an oil firm, a mining company, a nightclub, a film and video production house, record labels (for African artists who cross a musical spectrum that includes highlife, folklore, reggae, juju, and jazz), pressing plants, even a PR firm. Ultimately, it appears King Sunny’s greatest investment is in the lives of others. The Chairman estimates that over 700 people work for him in one way or another, with 200 of them directly employed in music.

“About 70% of my business is about music,” Sunny points out. “But I never allow any of the businesses, outside of music, to occupy too much of my time. I am lucky to have good managers running things.”

Recently elected as president of the Performing Musician’s Association of Nigeria, King Sunny continues to be a leading advocate for musician’s rights. He has put forth the first ever Musician’s Bill of Rights for ratification. This bill recognizes the basic rights of musicians, their creative work, and their right to earn a decent living. If all that weren’t enough to occupy most of his time, KSA also chairs the Musical Copyright Society of Nigeria, an organization whose mandate is to halt the rampant record piracy that plagues Africa and to protect the intellectual property and international trade rights of his fellow musicians.

We have many cases in court right now,” he says. “We’re fighting with the Nigerian Copyright Commission, because we want them to make sure that all radio stations, television stations and so on, pay the royalties to the musicians. And also to get more power to form a task force in order to arrest the pirates and to make sure piracy and the pirates are wiped out. My society is now doing a promotion for the people to know the difference between the pirated music and the originals. Most people say, ‘I didn’t know it was pirated. I just liked the music so I bought it.’ But they have to look for the originals, they have to look for the proper releases. We have also gotten the companies to put an official hologram on every cassette and every CD. All the recording companies are being assigned numbers from the Copyright Commission, so that if they find any official holograms on any pirated tapes, the government will know who is responsible. So, because of this, the pirating in Africa is not as bad as before.”

In his continuing efforts to support African music, Sunny has also established the King Sunny Ade Foundation, which the Chairman founded with local civic and business leaders. The Foundation, which is situated on five hectares of land donated by the Lagos State Government, includes a performing arts center, a fully-equipped recording studio and housing for young performers and musicians, and offers financial assistance to both the children of dead musicians as well to elderly musicians who can no longer perform.

“I think it is better for me to do this while I’m still alive,” the Chairman continues. “Most foundations are established after the death of the founder. I want to see it work. I just want the King Sunny Ade Foundation to remain, to be immortal, and if God permits, I will continue to do it.”

A longtime supporter of Nigerian political unity, in 1996, King Sunny created an eclectic African supergroup to record the song, “The Way Forward.” KSA brought together a number of different Nigerian stars from differing ethnic backgrounds to address the continuing problem of Africa’s cultural dissents.

“A friend and I co-wrote the song with the idea of getting different musicians from different traditions together,” KSA says. “I play with so many different people around the whole world, I began thinking, ‘What would be my contribution to my country?’ The politics of Nigeria are so bitter, which I try not to involve into my music, but no matter what you do, as an artist, your contribution is to tell the people to be proud that this is our country. So I thought it would be good for Nigeria’s musicians to come together to make ‘The Way Forward.’ It doesn’t have to do with the government, it has to do with the people. The people have to know this is our country, and only together can we make it work.”

“Whatever you do in life, you have to find time to enjoy yourself,” King Sunny explains, “because no matter what you do, no matter how much money you have, no matter how good a person you may be, tomorrow somebody else will come and you are going to be part of history. So what I preach is what you need to do is to do good, so you leave a legacy behind you. If you truly love your neighbor as you love yourself, that will continue when you’re gone.”

“Named for the position of Lagos relative to the equator, King Sunny Ade’s “Seven Degrees North” is an optimistic album, buoyed by what the liner notes call “a heavy new rhythm of democracy.”
Washington Post

“King Sunny Ade is the undisputed king of juju music, the dance-inspiring hybrid of western pop and traditional African music with roots in the guitar tradition of Nigeria. Although he’s yet to equal the success that he enjoyed with his early-1980s albums and American tours, Ade and his band, His African Beats, continue to weave an infectious blend of electric guitars, synthesizers and multi-layered percussion…”
All Music Guide

“His finest and most uniformly inspired domestically released recording in many years.”
JazzTimes