“….while much of what claims to be R&B and soul music today is quite forgettable, the return of soul’s daughter is more than a hopeful sign.”
– Mark Anthony Neal — AOL Black Voices.com

Lalah Hathaway’s distinctive sound, musical versatility (urban, jazz, rock and gospel) and superb technique are a winning combination and the foundation of her very successful “Outrun the Sky” release on Mesa/Bluemoon. The first single, a heart-wrenching cover of Luther Vandross’ song Forever, For Always, For Love, shot to #1 on the Adult R&B charts. Forever, For Always, For Love became Hathaway’s first single to chart on the Billboard’s Hot 100, appearing at #112 and #37 on the Hot R&B charts. “Outrun the Sky” features production from Rex Rideout, Mike City, and Chris Parks. The album’s second single Better and Better hit #121 on the Hot R&B charts. 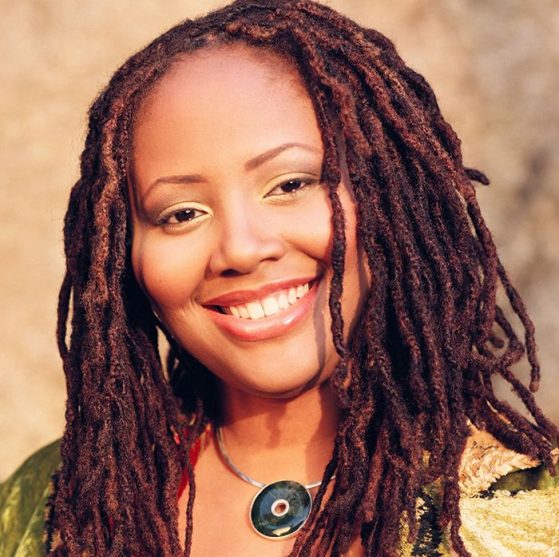 All things in time…so they say.

The finer things in life, such as art, can never be rushed. They arrive when The Creator deems the work, the channel and the audience to be ready.

Such is the case with songwriter and vocalist supreme Lalah Hathaway’s Outrun the Sky (in stores September 28, 2004), only her third album as a solo artist…and her first in ten years. It is, beyond the shadow of a doubt, her most revealing work to date – one that encompasses more of her own compositions than ever before. And with the album’s stylistic breadth, it will once and for all extricate the luscious, resonantly smoky-voiced singer from any “box” that listeners, including her staunchest fans, may have placed her.

“I am so excited that this record is finally done,” Ms. Hathaway declares with a playful mix of exasperation and gratitude. “People have been asking me for years, ‘When’s your new album coming out?’ The time it takes is never something you plan. Nobody waits for 10 years to put a record out! It’s just ‘the bizness’ and timing, particularly if you’re not the kind of artist who can be plugged into a niche. I do a lot of things and always have. It was a matter of finding the right place and people willing to make it happen.”

Ray Shields, Lalah’s longtime manager, found the perfect place for her: Mesa/Blue Moon Recordings, headed by George Nauful. “We have a really good relationship,” Lalah states. “He trusts my instincts as it relates to the peoplewho want to hear me and why. A lot of these songs would not have been able to go on my first or second record. I was not in a place creatively where people would let me do that.”

Such dedication and patience has yielded Outrun the Sky, a candidly personal, 13-song offering from the Berklee School of Music graduate whose mother is classically trained singer Eulaulah Hathaway and whose father is Donny Hathaway, a profound artistic contributor to what has been reverently dubbed “The Black Pool of Genius.”

Outrun the Sky takes you on a rich emotional journey through Lalah’s reflections on love and relationships. From the soaring acoustic resiliency of “Stronger,” the country-tinged “If You Ever” and something funky to shake off an old lover to titled “Back Then” to the delectably dreamy “More,” a long, hot soak in a steam bath of blues titled “We Were Two,” and the soul-baring groover “In The End.” Each and every song is its own story, speaking intimately to your spirit and on multiple levels.

Producer Mike City (whose work has minted hits for such kindred artists as Gerald Levert, Yolanda Adams, Dave Hollister, Mary Mary and Carl Thomas) contributed the seductive cha -cha “Better & Better” and the delightful “Your Favorite Song,” the latter a sentiment that everyone will relate to. “I hear that phrase, ‘your favorite song,’ so much,” Lalah relates, “in reference to my songs, my dad’s songs, or songs in general. Me, I’ve rarely had a favorite of anything, not even a favorite color.

There’s even a slinky, organ and electric guitar-driven rocker with powerfully shifting dynamics that Donny would have dug, titled “Admit It.” “That was penned by some friends,” Lalah shares. “My band and I performed it in Japan and they loved it.” And then there is “Boston,” an especially haunting piece that sets you down in a stark painting from Lalah’s past for a misty meditation on not only lost love, but lost innocence.

“This album is really about growing up,” Lalah states. “It’s about coming into my own – becoming a woman – and figuring out how to most gracefully maneuver through the joys as well as the disappointments of life.”

Much of the inspiration for the love songs on Outrun the Sky was autobiographical. Some of Lalah’s friends were going through similar situations, so she was privy to much emotional information that nourished her song craft. “I’m a little more naive than I care to admit sometimes,” she says. “I would sing certain songs, people would cry and I’d think, ‘Don’t cry.’ It’s only in the last few years that I’ve wanted to cry after singing those songs. I sang a lot of heartbreak songs on my first two albums, but I never had a lot of that in my life. At this point, my record seems prophetic. I can feel the songs because I went through the experiences and I connect with that overall feeling. It’s like an inner joy/pain…and I’m beginning to understand what that feeling really is.”

It is this deeper intuition that thoroughly informs her brilliant interpretation of the CD’s sole cover, Luther Vandross’ “Forever, For Always, For Love.” Among the last songs Lalah recorded, it was originally produced by Rex Rideout for the all-star GRP concept project Forever, For Always, For Luther, a salute to the ailing music giant who has been sidelined by a stroke. It is an undeniable standout of that collection and Outrun the Sky.

“I’ve never met Luther,” Lalah admits, “but I love his music. My aunt was into the group Change [with whom Luther sang the hit “The Glow of Love”]. And when I was in the 6th grade, a gang of my girlfriends’ moms ALL had Luther’s records. When Rex invited me to be a part of the project, I had another song in mind, but someone else had recently recorded it. So we went back and forth over the e-mail. When Rex suggested ‘Forever, For Always, For Love,’ I didn’t remember it right away. So I bought it off of iTunes, listened, then told him, ‘I want to do this as ‘Luther’ as possible, so let’s keep it in his key.’ After that, I didn’t listen to the song again until the day of the session…on the way over to the session. The basic track was already done and I cut my vocal in three hours. That’s the kind of experience you always want in the studio. Every time I see Rex, he remarks about how happy he is with it.”

The album title Outrun the Sky, suggests many things…escape…an indelible artistic impression…the never-ending journey of life. “I wrote that song around 1996,” Lalah explains. “I was on a flight to Las Vegas that was really turbulent. Wanting to focus on something else, I started thinking about all the things I would do once the plane landed. That title is so ‘me’ as far as where my head is…slightly ethereal. It is also confirmation of what my dad is able to do right now. It absolutely floors me that 25 years after his death, he has a new record out (the compilation These Songs For You, Live!) and so do I. That’s almost too much for me to handle.”

Out Run The Sky

by Lalah Hathaway
Available now on:

Better & Better
Forever, For Always, For Love
Admit It
More
How Many Times
We Were Two
Boston

“….while much of what claims to be R&B and soul music today is quite forgettable, the return of soul’s daughter is more than a hopeful sign.”
Mark Anthony Neal — AOL Black Voices.com

“….This long-awaited third album is genuinely stunning – it not only proves to be Ms. Hathaway’s most impressive release to date, but is also a serious contender for soul album of the year.”
Blues & Soul

“The CD (Outrun The Sky) is just short of a classic.”
Charlotte Post

“Few can match her intimate, husky alto and the vivid pictures that her lyrics and vocals create.”
Lorrie Irby’ Top 10 R&B Albums of 2004 — Dallas Morning News

“Lalah is one of those rare contemporary artists who transcends time and genre.”
Louisiana Weekly — Dallas Morning News