Formed in 2003, Logan are a five piece hard rock band from Glasgow, Scotland. Their self funded debut album “First Leaf Fallen” was released in 2003 and was followed by “Welcome To The Wasteland” a year later. The albums releases and relentless gigging saw the band build an impressive and loyal fanbase, and sell more than 8000 cds. 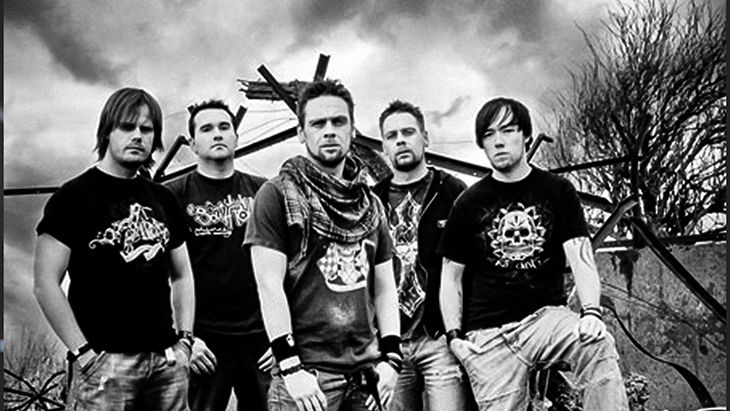 In 2005 they secured high profile support slots with Alter Bridge, which helped them to become one of the most talked about independent bands in the UK. In June 2006 they released their first single “When I Get Down” which debuted at No.12 on the Official UK Rock Chart and proceeded to stay in the chart for seven weeks – a feat never before achieved by an unsigned band. September 2006 saw the release of their third album Cruel Little World and their second single Hallowed Ground followed. Again breaking into the UK Rock Chart Top Twenty; the only unsigned band to have achieved this incredible feat.

2007 saw the band win two awards at The UK New Music Awards and they also received a nomination as “Ones To Watch in 2008” by the UK’s leading rock magazine “Classic Rock”. They were also included on the accompanying cover mount cd.

2008 was a great year for Logan. Airplay of the single “Lost & Found” won the band a support slot with Bon Jovi at Hampden Park in front of 40000 fans, and the subsequent 8 date UK headline tour pushed sales of Cruel Little World to over 10,000. The band headed to LA in October of that year to record two videos and play a showcase at the world famous Roxy Theatre on Sunset Strip. On their return, a new pressing of “Cruel Little World” with three additional tracks and new packaging was released to coincide with a 24 date European tour in support of Alter Bridge, which was a great success.

The tour saw the band conquer new audiences in 11 countries and set them up nicely for 2009. The year started with a bang, seeing Logan pick up the “Best New Band” prize at the Scottish Variety Awards in February. A number of Scottish shows in March and a headline UK tour in May was followed by their debut appearances at the Download and Hard Rock Hell III festivals. Support slots with Thunder kept the Logan train rolling into late 2009.

Having worked relentlessly on new songs the band recorded over 20 demos in preparation for the recording of this, their fourth studio album. Hooking up with legendary producer Keith Olsen, the band began recording the final cuts in March 2010 at Blast Studios in Newcastle. “The Great Unknown” was released globally on October 5, 2010.

by Logan
Available now on:

“Good Morning America, this is your wake up call. Logan is a band that deserves your attention. These Scottish boys are simply better than what you’re currently listening to. They combine heavy guitar riffs that could wipe out small islands and passionate vocals that make repeated listening just as good as the first time. Perhaps its time we started outsourcing our music.”

“Accolades continuously pour in about this fast-rising band. Their instantly memorable tracks as ‘Hallowed Ground,’ ‘Jump in Again,’ and ‘Rock & Roll Way’ are ready to take radio by storm – it appears to be only a matter of time until the rock world falls under the hard rockin’ spell of Logan and ‘The Great Unknown.’”
Spencer Matulaitis — PureGrainAudio.com

“Hard rock and soaring melodies give Logan a sound that can only be achieved through genuine hard work and the polishing of raw talent.”Guitar Magazine