Side By Side’ is a perfect example of his talents. 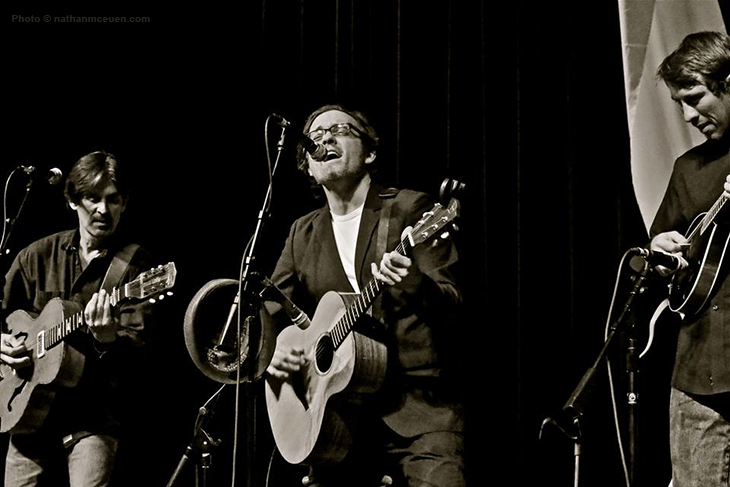 Two years ago, Nathan was approached by Russi Taylor, the voice of Minnie Mouse, after a show Nathan had done in Pasadena. Russi was holding a banjo that belonged to her late husband Wayne Allwine , the voice of Mickey Mouse.

As she opened the case to show Nathan the custom made Deering banjo with Wayne’s initials and a Mickey Mouse head engraved on the headstock, she told Nathan how much Wayne loved to play and that she wanted his banjo to be played again. Russi then handed the banjo to Nathan and said that she wanted him to have it. At that moment, Nathan found his inspiration for his newest album.

Saying ‘thank you’ didn’t feel like enough for the overwhelming feelings of gratitude and surprise Nathan felt when Russi presented him the banjo. The one thing he could do was write a song on that banjo in honor of the love and marriage between Russi & Wayne, and their decades long career together as the voices of Mickey & Minnie Mouse.

When the song ‘Mice’ (part I & II) was presented to Russi, she was completely enamored with the music and asked Nathan if he could write one more song for her and Wayne. She added that she has ‘a line’ that she thought would be perfect for a song and that she wanted him to use it. The line, she said was “the last thing that Wayne said to me before he passed away.”

Nathan was speechless as she continued, “the last thing he said to me was, ‘it’s alright Russi, I have pictures of you in my heart.’”

So she asked Nathan, “Do you think you can write a song with the line: I have pictures of you in my heart?”

Feeling completely captivated by the story, Nathan began to write ‘Pictures of You in My Heart’. Throughout the process of writing this deeply moving song, he created eight more banjo and singer-songwriter tunes for a total of eleven captivating songs which includes a bonus track not available on the physical CD.

McEuen collaborated and co-produced with a string of musicians on Side by Side, these included Chris Caswell (Daft Punk, Tron, The Muppets), and Jesse Siebenberg (Supertramp, Lissie).

by Nathan McEuen
Available now on:

Mice (Part 1): They Meet
Mice (Part 2): The Magic
The Storm
The Calm in the Storm
Ridge Line

“I think it [Side By Side] is wonderful. Great record; accomplished and emotional.”
–Steve Martin (Writer, Comedian, Musician, Actor)

“I love his music and I love this album [Side By Side]!”

“Nathan McEuen’s light is shining bright. A fine singer, guitarist and an excellent songwriter. There is hope on the horizon.”
-­Chris Hillman (The Byrds, The Flying Burrito Bros.)