Out to Lunch frontman David Levy leads a crack ensemble that features stellar keyboard playing from Eric Lane, who stands out on every song he solos in. What starts out as a James Brown-influenced funk outfit takes interesting turns into breakbeat grooves that touch on jazz, house, dub reggae, Latin and beyond. From the straight-ahead groove of “The Good Doctor” through the acid-trip soundtrack of “Maudlin’s Eleven,” OTL’s accessible grooves will keep your brain and booty equally engaged. A funky thumbs up to OTL’s original and extraordinary debut. —Keyboard Magazine

The cutting edge sound of New York City-based Out to Lunch is all about pushing the limits of the experimental jazz scene. Billboard magazine has called the band’s 21st century sound, “a distinctive brand of funk…expanding the range of the listener’s experience,” creating a sound that hits both the mind and feet — from funk to breakbeat, dub to house to electronica and dance-based improvisation. Out to Lunch has not only established itself as a mainstay on the New York scene, but has toured extensively through North America and Europe. 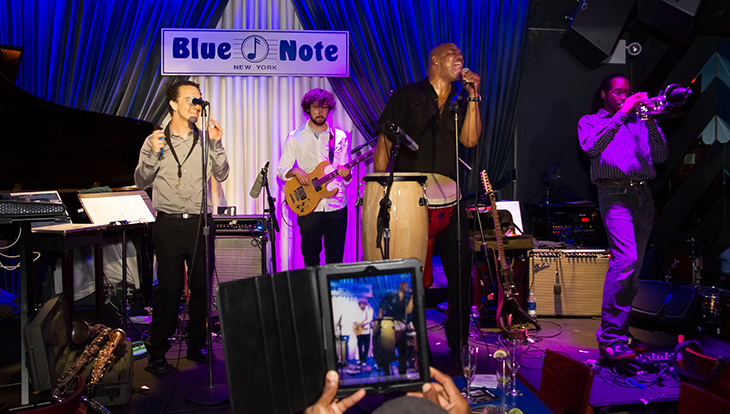 New York ElectroSoul has hit the streets. And the streets of New York are where it emerged. Busking on a subway platform one afternoon the then unknown vocalist Damon C. Scott was discovered by David Levy. That was back then, in 2007 – a lot has changed.

Damon and David have worked together ever since. Writing songs, playing shows, and recording material, which is premiered in their first official release, Back Then. Damon C. Scott is now best known for being the voice behind the track Look Right Through, which took the UK by storm, topping the charts in 2013. The hook up for this track was made through David, and now Damon is returning the favour.

The band works under the name, Out to Lunch, and Damon fronts the band with his distinctively powerful voice and soulful harmonies, all supported by funky basslines and deep-house grooves. David holds it all down on electronics, keys and horns. The Village Voice has hailed Out to Lunch as “ambitious and funky,” while Billboard Magazine calls them “a distinctive brand of funk…expanding the range of the listener’s experience.” Find out for yourself with their new video, Back Then, and album and tour to follow in 2016. Dancing shoes recommended.

Out to Lunch (instrumental)

Pushing the depths of the underground jazz scene, cutting edge New York City-based Out to Lunch has recently released its third album, No One Left Behind, on one of the finest indie record labels, Mesa Recordings. Tracks such as “In Da House” and “It’s a Jungle Out There” move effortlessly from the world of funk to breakbeat, from dub to house, creating a sound that hits both the mind and feet. Out to Lunch has not only established itself as a mainstay on the New York scene, but has toured extensively through North America and Europe.

Canadian-born multi-instrumentalist David Levy is the founder and leader of Out to Lunch. David has released three albums with Out to Lunch, Excuse Me While I Do the Boogaloo, Melvin’s Rockpile (Accurate Records) and No One Left Behind (Mesa Recordings). He can also be heard as a sideman on Verve Remixed 3 (Universal Records), as well as on the Junior Boys, It’s All True, Beyond Dull Care, So This Is Goodbye, and Last Exit (Domino Records). David plays bass clarinet, soprano saxophone, bansuri flute and Ableton Live.

Josiah Woodson received a Master of Music degree from the New England Conservatory of Music in Boston. It was there where he began touring with the “The Makanda Project” and sharing the stage with such acclaimed musicians as Oliver Lake, Yoron Isreal and John Lockwood. Woodson relocated to New York City where he plays trumpet, flute, and guitar in several bands including Out to Lunch, The People’s Champs and The SuperPower Horns, with whom he wrote and recorded material for the Grammy award-winning singer Beyonce’s latest album, 4 (Columbia Records).

New York-based pianist & keyboard player Walter Fischbacher has worked with jazz luminaries such as Randy Brecker, George Garzone, Ingrid Jensen, Wolfgang Muthspiel, Chico Freeman, Tim Lefebvre, Joel Rosenblatt and the Vienna Art Orchestra. Originally from Austria, Fischbacher relocated to New York in 1994, where he, in addition to his work as a musician, manages his own recording studio and leads his band, “Phishbacher.” His most recent release Proove That! (Lofish Music) has been called “inspired” and “super funky” by international jazz reviews on both sides of the Atlantic.

A native of Montreal, Canada, Zack Lober is a bassist, composer and DJ currently based in Brooklyn, New York. He is a co-founder of the groups “The Story” and “Byproduct” and an active bandleader under his own name. As a sideman he has worked in groups led by such musicians as David Binney and Donny McCauslin, and has toured Europe, Mexico, Canada, and the United States. Lober holds a Masters degree from the Manhattan School of Music

No One Left Behind

“A distinctive brand of funk…expanding the range of the listener’s experience.”
— Billboard Magazine

“Bandleader David Levy (woodwinds and electronics) translates his enthusiasm for James Brown’s rhythmic genius and Eric Dolphy’s improvisational acumen into this ambitious and funky groove-prov octet. Funk, jazz, gospel, and dub bounce smartly around the room on the Lunch’s highly enjoyable new Excuse Me While I Do the Boogaloo.”
< — Village Voice

“New York group Out to Lunch refuses to accept that there are no new ideas left for 21st-century jazz musicians. On their second album, the band – part of the sizzling scene surrounding New York City musical hotbed Nublu — brings forth a percolating blend of funk riffs, hip-hop beats, post-bop jazz chops, and dashes of dub and electronica production techniques.”
— LimeWire

“Levy’s soloing on bass clarinet, sax and bansuri flute is accomplished and compelling, while his deft use of Ableton Live elevates this from being latter-day Weather Report.”
— Exclaim Magazine

“Percolating instrumental Jazz from this international collective that simply nails the space between smooth night grooves and sophisticated flights of funk.”
— The Pulse

“The entire disc is brimming with great tunes, but the ones getting the most love from my stereo are “Maudlin’s Eleven,”… and “Jerome the Negligent Nanny.” The honest, improvised feel of “Jerome” captures the heart of Excuse Me. If they continue to play with the quality displayed on Excuse Me, Out to Lunch will be back to work in no time.”
— Jambase

“Out to Lunch features…a very danceable sound that still manages to break new musical ground. Perfect for a hot summer night at the coolest club in Prague.”
— The Prague Post

“Levy leads this extraordinary exploratory improvisational funk-rock band from their base in NYC…Out To Lunch create an entirely unique signature sound by fusing a full horn section with the band’s rhythm section, and crossing their organic instrumentation with live electronica. Melvin’s Rockpile feeds listeners improvisational imagination with electric post-bop meets jazz-funk energy while continuously challenging the listeners aesthetic sensibility and captivating a cross-culture of audiences everywhere.”
— All About Jazz

“The people in this band know how to play, explore, and then move deeper, as deep as Atlantis will allow. It’s moving, grooving, exciting and surprising at the same time. You know you’re listening to an album with substance, but then it moves you deeper than you expected, and you can’t help but take another breath to swim through its depths.”
— Music for America

“The material on Melvin’s Rockpile is perhaps best described as electric post-bop meets jazz-funk meets the mildly avant-garde. Listeners… should have an easy time getting into Melvin’s Rockpile.”
— All Music

“Excuse Me While I Do the Boogaloo features a melodically balanced mix between avant jazz, meshed genres and funky bounce. Boogaloo’s dynamic diversity is…a seamless DJ-style mix of musical Americana (and Caribbeanna), stretching from the ambient jazz house of “Sebbie Says” to the sinewy dub-wise klezmer fusion of “Maudlin’s Eleven.”
— Exclaim Magazine

“Out To Lunch’s sound is dizzying in scope, playful in execution, and always close enough to their funk/ back-beat foundation to inspire pelvic-heavy dance…this album is a unique musical statement from a band of accomplished and talented players.”
— Beyond Race Magazine

“Out to Lunch frontman David Levy leads a crack ensemble that features stellar keyboard playing from Eric Lane, who stands out on every song he solos in. What starts out as a James Brown-influenced funk outfit takes interesting turns into breakbeat grooves that touch on jazz, house, dub reggae, Latin and beyond. From the straight-ahead groove of “The Good Doctor” through the acid-trip soundtrack of “Maudlin’s Eleven,” OTL’s accessible grooves will keep your brain and booty equally engaged. A funky thumbs up to OTL’s original and extraordinary debut.”
— Keyboard Magazine

“Out to Lunch is a mix of addictive jazz melodies…I think Third ‘N Otis caught my attention the most… but all tracks are superb.”
— nonmainstreamreviews.com

“With Dolphy’s high standards in mind, and a yen for the dance music of James Brown, Levy founded Out to Lunch. There’s two elements, one is groove-oriented music, and the other is improvisation, and they’re both there.”
— Relix Magazine

“The music has that big James Brown bottom end but overtop is horn and reed work steeped in modern jazz tradition and monster Hammond organ runs.”
— The Hamilton Spectator

“A little funky, a little soulful, a little electronica, a little jazzy = a lotta diversity and groove.”
— Last.FM

“Their sound is groovy and danceable, while also giving a new meaning to what you might think of as traditional jazz.”
— Aquarian Magazine

“David Levy (clarinet & sax) leads a freewheeling band through a mash-up of classic funk, improvisational jazz, electronica and a bunch of other things. Hard to pin down, but it’s a fun ride.”
— zookeeper.stanford.edu

“Out to Lunch are very skilled musicians…the music is tight, well done and all around plain good.”
— Hot Indie News

“Out to Lunch’s songs are like snow flakes, each one is different, and once in a while they give you goose bumps.”
— CJN

“For some tasty funk-infused jazz, check out the NYC based Out to Lunch. They pulled their title from a 1964 album of the same name by the late great Eric Dolphy, and they do the man some justice.”
— Play/Pause 2.0