This CD re-creates jazz classics from masters such as Django Reinhardt, Karl Krass, and Eddie Lang, and features Standards like Jersey Bounce, The Nearness of You, and Lullaby of Birdland. Both Emmanuel and Taylor also contributed original compositions to the project.

Taylor and Emmanuel and had an instant chemistry. “Martin and I go back to the early 90s when I first saw him on TV in Australia. I was so amazed by his playing, I rang the TV station and they gave me his hotel details,” recalls Tommy. “I immediately rang him and invited him to play with me at a beautiful theatre in Sydney.

“I have learned so much from Martin, as he comes from a jazz background and I come from a country and rock background. We both have a strong love of melody and arrangements that allow our playing to interweave effortlessly. Sometimes it feels like time stands still when we are playing together. Martin once introduced me on stage as ‘the abominable showman’ — I have always called him The Governor.”

Two-time Grammy nominee Tommy Emmanuel is one of Australia’s most respected musicians. The legendary guitarist has a professional career that spans almost five decades and continues to intersect with some of the finest musicians throughout the world. A household name in his native Australia, Tommy has garnered hundreds of thousands of loyal fans worldwide.

Tommy’s unique “finger style” is akin to playing guitar the way a pianist plays piano, using all ten fingers. Rather than using a whole band for melody, rhythm, bass, and drum parts, Tommy plays all that – and more – on one guitar. Guitar legend Chet Atkins was one of the first to inspire Emmanuel to try this “fingerpicker” style as a child. Decades later, Atkins himself became one of Emmanuel’s biggest fans.

Emmanuel’s unusual talent and life are common lore in Australia. Born into a musical family, Tommy and his older brother Phil were considered child prodigies. Tommy got his first guitar at age 4 and was taught by his mother. He learned by ear, with no formal instruction, and has never read music.

By the age of 6, he was already working as a professional musician in the family band, variously named The Emmanuel Quartet, The Midget Surfaries and The Trailblazers. Tommy played rhythm guitar and his older brother Phil played lead, along with their brother Chris on drums, and their sister Virginia on slide guitar. The Emmanuel siblings earned the family’s sole income for several years. Tommy doesn’t remember such responsibility as a hardship. “I’ve spent all my life from the age of four playing music and entertaining people. I never wanted to do anything else.” By age 10, Emmanuel had played his way across Australia.

In 1962, Tommy heard Nashville guitarist Chet Atkins’ music for the first time and was riveted by the complexity of Atkins’ solo sound. He spent hours trying to figure out the “fingerpicking” style and gobbled up each of the American star’s albums as they came out. Shortly after his father’s death in 1966, Tommy even wrote Chet a letter and, to his surprise, the famous artist and producer wrote him back. Chet would grow to become Tommy’s mentor and primary influence, but it would be another 15 years before the two would finally meet in person.

After his father died, the Emmanuel family was approached by Australian country music star Buddy Williams, who took them on the road until they were forced by the Australian child welfare department to stop travelling. The children were then sent to a regular school. Tommy played in The Trailblazers on weekends. He also taught guitar and made several TV appearances in musical competitions. Emmanuel’s first brush with fame came when The Trailblazers won two TV talent contests and produced an album.

Leaving school and home in his early teens, Tommy embraced big city life in Sydney in order to pursue his career as a professional guitarist. By the 70’s, he was playing in clubs all over the city and soon found himself in high demand as a session player and sideman. During the mid 70s through the early 80s, Emmanuel played on recordings for Air Supply, Men at Work and dozens of other popular bands and artists, as well as thousands of commercial jingles. He soon became known as one of the best modern guitarists in Australia. Some of his most notable appearances were on the Air Supply hit singles Lost in Love, All Out of Love, Every Woman in the World, and Now and Forever.In 1985 Emmanuel joined one of the decade’s biggest Australian rock bands, Dragon, and recorded the platinum-selling album Dreams of Ordinary Men. In 1987, Dragon toured with Tina Turner on her ‘Break Every Rule’ tour. As a songwriter (co-writing with 1960s Australian star Steve Kipner), his compositions have been recorded by Olivia Newton-John, Al Jarreau, and Sheena Easton. It is for his successful solo career, however, that Emmanuel is best known.

In 1980 Emmanuel made a trip to America and finally met and got to play with his hero, Chet Atkins, in Nashville. From that moment forward, the Tennessee master guitarist and producer took the twenty-something Australian ace under his wing and began introducing him to other guitar legends. Tommy speaks of his mentor with the love and gratitude of a son and Atkins’ influences are evident throughout his music and personal philosophy. Emmanuel’s technical precision, his virtuosic improvisations and his unusually broad repertoire – which encompasses not only country and bluegrass, but pop, jazz, blues, gospel, even classical, flamenco, and aboriginal styles – bespeak Chet Atkins’ legacy.

Emmanuel got his solo instrumental career off the ground with the release of the gentle and textural Up from Down Under album (1988). In the 90’s his efforts blossomed and became recognized and rewarded by the Australian music industry and media. Sales of his albums set records that have yet to be broken.

His versatility has taken Emmanuel from international Jazz Festivals to shows with the Sydney Philharmonic, The Grand Ole Opry in Nashville, and performances for the Masai people in remote areas of Kenya. Tommy’s dream of recording with Chet Atkins came true in 1996 when the pair made an album titled The Day the Finger Pickers Took Over the World, for which Emmanuel received his first Grammy award nomination.

Tommy was well-known in Australia, Asia, and Europe long before his presence was felt in America. By 1997 his album Midnight Drive was in the top five for 16 weeks, which made him the “most added artist” on the NAC radio charts that year. In Nashville in 1999, Tommy was honoured by his mentor, Chet Atkins with the title of “Certified Guitar Player” for his contribution to fingerstyle guitar, a rare distinction shared by only three other people in the world (Jerry Reed, Steve Wariner and John Knowles).

After Tommy’s appearance with his brother Phil in the Closing Ceremonies of the Sydney Olympic Games and his debut at the famous Walnut Valley Festival in Winfield, Kansas, in late 2000, Americans wanted to know who this mysterious Australian guitar virtuoso was. In 2001, Emmanuel released his first solo-acoustic album, ONLY, and in 2002 it debuted in America.

Emmanuel’s popularity in the US has grown by leaps and bounds in the last few years, aided by a non-stop touring schedule and increasing exposure in the media. 2005 kicked off a stream of US honours and awards. Tommy was inducted into the National Thumbpickers’ Hall of Fame in Muhlenberg, KY (the only non-American ever to be selected) and awarded with Thumbpicker of the Year and Album of the Year by the group, as well.

His last solo album and DVD Center Stage (2008) is based on the popularity of Emmanuel’s episode of a PBS series called Sierra Center Stage filmed live at the famous Sierra Nevada Brewery venue in Sierra Nevada, CA. Tommy’s Center Stage video has been featured on PBS stations around the country during 2009, drawing ever-larger sell-out crowds at his concerts. Tommy was also honoured with Guitar Player Magazine’s most prestigious annual Guitar Legend award in 2009, as well as being named Thumbpicker of the Year for the second time. Most recently, Guitar Player’s 2010 Readers Choice awards named him Best Acoustic Guitarist for the second time.

At 57, performing live is more important to him than ever and he tours constantly, playing over 300 concerts a year for the last five years. Guitar players of all levels come to his shows to watch the magic hands of the ‘guitar Wizard of Oz,’ but his appeal goes far beyond musicians. His live shows are known for their humour, passion, and infectious joy. The power of his charismatic showmanship will be an enduring part of Emmanuel’s legacy. Tommy Emmanuel’s message is pure love for the music and his delight in sharing it with the world, one audience at a time..

The Colonel & The Governor

By Tommy Emmanuel
Available now on: 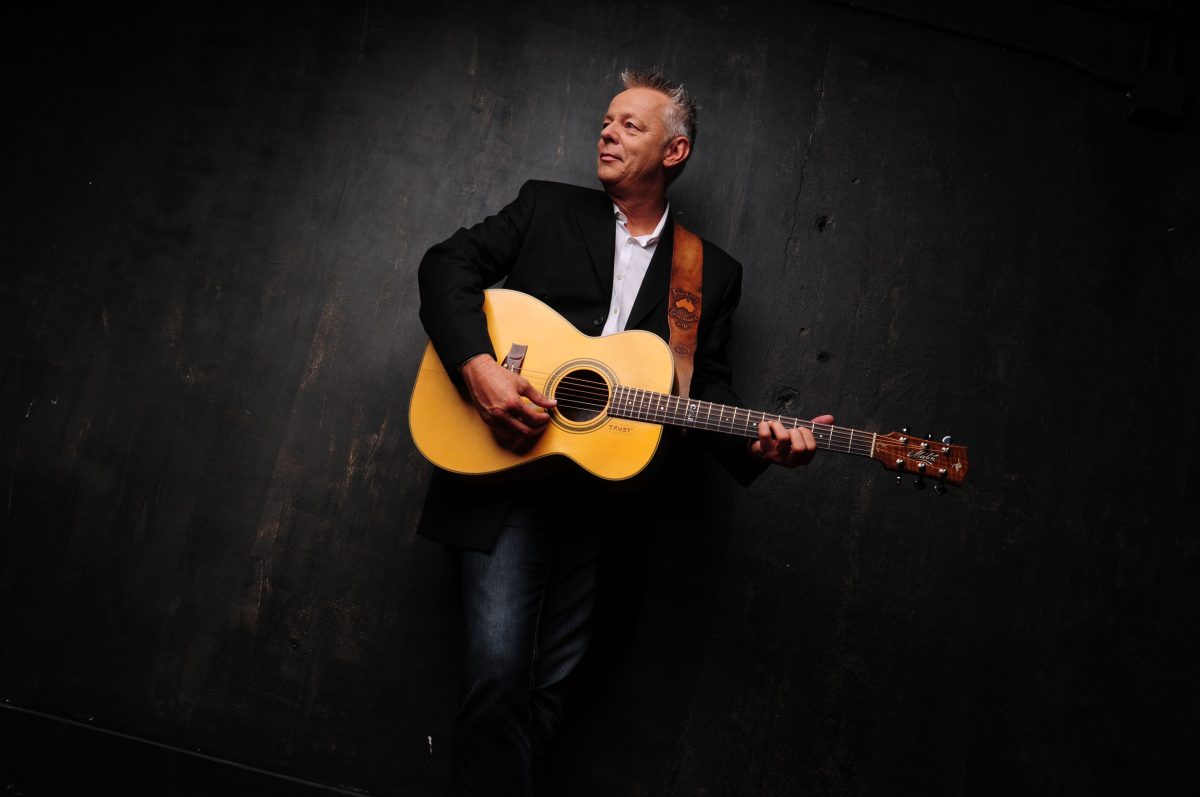 “One of the greatest guitar players I have ever seen.”
-Chet Atkins

“Tommy Emmanuel is the greatest one-man-band around the world.”
-Videosift.com

“Aficionados of the style out there will love it…the guitar work is mesmerizing.”
No Depression

“The sound they put together is inviting, homely and truly incredible. The images each tune throws up is one of stimulating and carefully loved enticement, designed to relax the listener whilst at the same time giving a sense of hope and off beat gentleness.”
— Liverpool Sound and Vision

“The music has a delicious feel, relaxing and soulful and one can picture up families, even with small children, dancing around the kitchen or living room, the music has a wholesome, family feel about it all, and in today’s commercial world this album is a simply a blessing.”
— Rockshot.com

“Any aspiring guitar player might have one of two reactions to a performance by six-string virtuosos Tommy Emmanuel and Martin Taylor. You might stand, open-mouthed in amazement and admiration, and walk away inspired and energized. Or you might savor their complex skills and beaming passion, then abandon all hope of ever being able to master the instrument yourself… Few can match his [Emmanuel] flawless standard, but for his latest record release and tour Tommy has teamed up with a man with all the right credentials – his long-time friend and British acoustic guitar hero Martin.”
— This Is Somerset